How fast is EV adoption likely to happen?

The transition rate to a renewable energy economy is most often estimated based on linear projections of current trends. For example, Bloomberg offers predictions for new electric vehicle adoption, which are seen as aggressive by other mainstream analysts. These suggest that we are on our way, but adoption will not be fast enough to meet aggressive climate goals. (first graph).

However, the futurist Tony Seba points out that the actual cost reductions for solar and batteries already underway will drive much faster adoption of electric vehicles (EV)s than shown in even the Bloomberg projection. (second graph)

As that begins to happen, the cost of oil will fall. It does not take more than a fractional reduction in the demand for oil to massively reduce the price. However, even a 70% drop in the price of oil would still not be enough to make new internal combustion engine cars compete with new electric cars that cost half as much.

If the cost of an electric vehicle reaches half the cost of the lowest cost internal combustion engine vehicle in 2026, how is it possible that EV sales will remain at only 10% of the market as shown in the Bloomberg projection?

Every automaker in the world is currently taking the revenue from selling SUV's at an inflated profit and ploughing that money into EV development as fast as they can. The Bloomberg graph actually projects EV bus sales flattening in 2024, just at the time when the cost of batteries for EV busses will have fallen to the point where EV busses will be well below the cost of diesel vehicles. The Bloomberg graphs are "in-credible" (e.g. not-credible) and seem designed more to avoid straying to far from mainstream financial analysts expectations than to actually project the most likely scenario. Namely, the EV adoption curve will look more like the smart phone adoption curve.

Once a technology is worked out and the economy of scale in mass production kicks in, a disruptive new technology tends to go from 10% to 80% in roughly a decade. And in this case the curve is not showing the adoption of an entirely new product, but the percent of sales for the new version of a product vs the obsolete version of the same product. Once the EV reaches half the cost, or less, of an ICE vehicle, with both lower fuel cost and vastly lower maintenance costs, is it really reasonable to expect that ICE sales will continue at all?

If EV adoption follows a similar pattern to all other new technologies, and production can expand fast enough to keep up with demand, the shape of the adoption curves might look something more like the final graph.

While the actual EV cost reduction curve suggests that there will be an economic tailwind, which could make previously unimaginable growth rates inevitable, proactive institutional commitments will help insure that we act as rapidly as the cost of technology makes possible. The curves shown here might happen by themselves. But to achieve zero fossil in 2030 we will need to go even faster. We need to make the curves begin to ramp up even faster to shift them forward in time. To do so, we will need to combine technology driven cost reduction with a conscious societal movement over the next few years to accelerate the initial support needed to finance and adopt very rapid transformation. 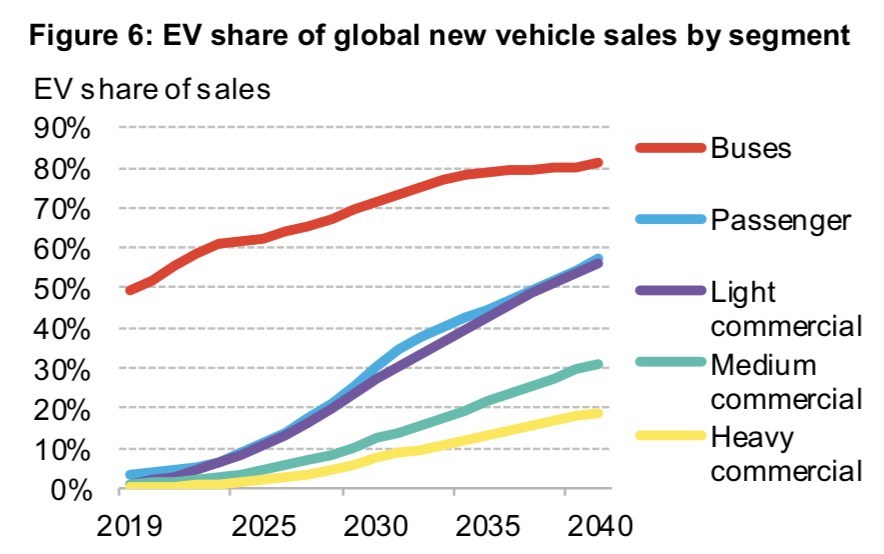 This first graph shows a recent projection of the future growth of new electric vehicle (EV) sales as a percent of global market published by Bloomberg. Even this projection is regarded as highly threatening and disruptive to the fossil energy sector.
‍
‍ 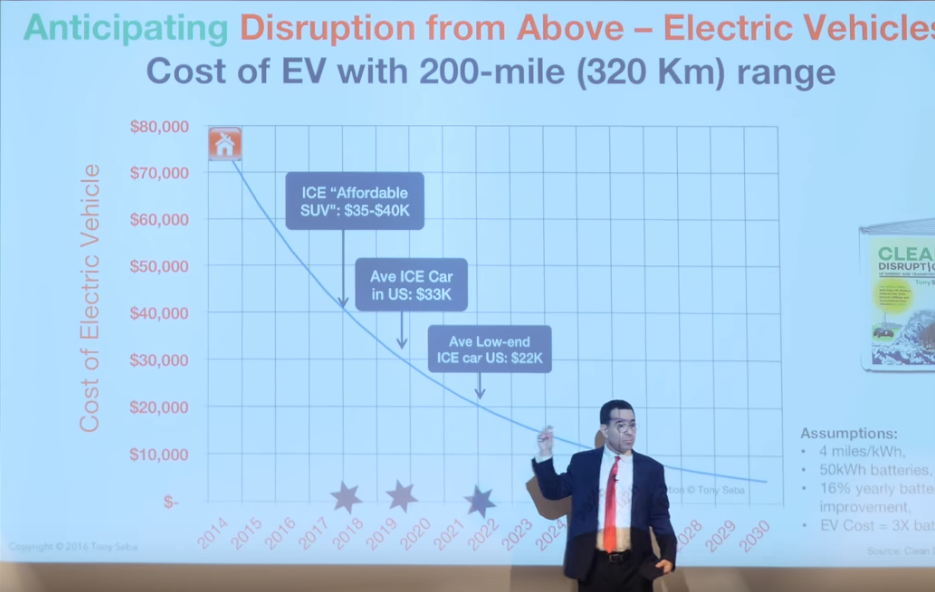 The second graph is screen grabbed from a video, showing Tony Seba's analysis of the cost of EV vs internal combustion engine (ICE) vehicles over the the past 5 years, with that cost reduction trend projected into the future at the declining average rate actually observed.
‍
‍ 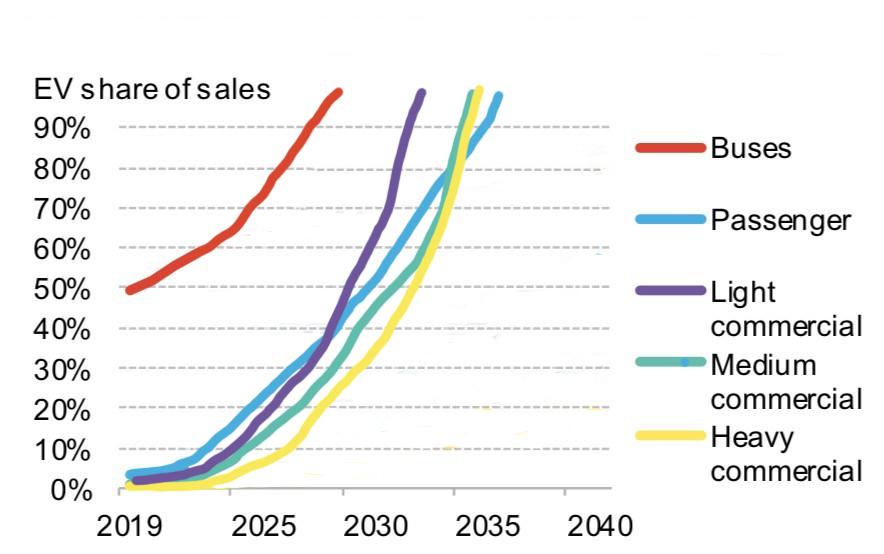 The final graph is a hypothetical version of the one shown by Bloomberg, in light of the insights pointed out by Seba and Felton.
‍
‍